The 100th edition of the Tour of Flanders takes place on Sunday, Aptril 3 2016. The course covers 256 km, with a smooth alternation of 7 cobblestone strips and 18 climbs. 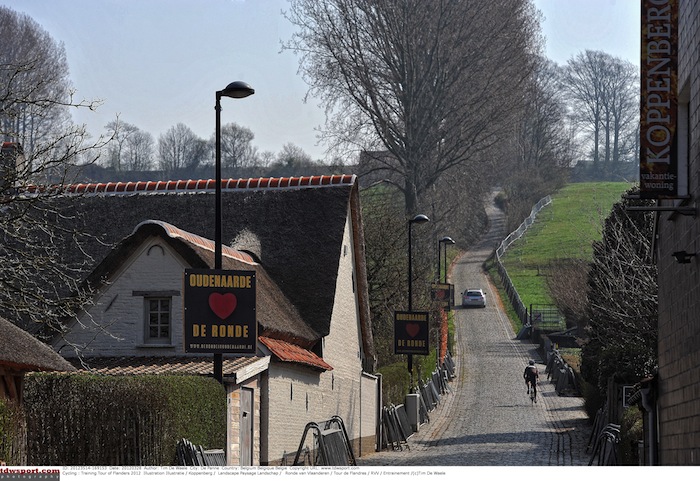 The start is situated, as usual, in Bruges. The race continues in the direction of Torhout, native city of Karel Van Wijnendaele, founder of the Tour of Flanders. Then, the cyclists will be heading for the cities of Roeselare and Tielt, residence of Roger Decock, the oldest still living winner of the Tour of Fanders.

After this passage, the cyclists will be continuing towards the Flemish Ardennes, and will have to cross the first cobblestone strip, the Huisepontweg, in Wannegem-Lede to proceed to Oudenaarde. At that very moment, the Tour of Flanders for Elite Women will start over there, covering a distance of 138km, including the same combination of Oude Kwaremont and Paterberg climbs.

After the passage through Oudenaarde, the Oude Kwaremont will be hit for the first time.

Because of road works in the neighborhood of the Molenberg, the Holleweg cobblestones have been replaced by the Jagerij, which allows the cyclists to climb the Molenberg after all.

This year again, the Koppenberg will be the first of 6 consecutive climbs in the final, which lies 45 km further on, followed by the Steenbeekdries (at 39km), the Taaienberg (at 37 km), the Kruisberg (at 27 km), the Oude Kwaremont (at 17 km) and the Paterberg (at 13 km). This follow-up of climbs in the final could stand for a thrilling climax.

The focus of the Tour lies again in the 3 climbs of the Oude Kwaremont and 2 climbs of the Paterberg, where the audience will be able to follow the finale in all its suspense.

The arrival lies for the 5th time in Oudenaarde, at the heigth of the Minderbroedersstraat.

The organization has foreseen 5 public villages for this 100th edition : at the Oude Kwaremont, Paterberg, Kruisberg, Koppenberg and at the arrival in Oudenaarde.

Add your story, info or media to Tour of Flanders 2016

Subpages for Tour of Flanders 2016