Bruges remains the start setting of this 99th edition of ‘Vlaanderens Mooiste’ (Flanders most Beautiful One) which takes place on Sunday, April 5th. After a passage through the city center of Kortrijk and Zwevegem, this year the Villaged of ‘The Ronde’, the cyclists are heading towards the Flemish Ardennes. After 100 km, the cyclists will be reaching Oudenaarde for the first time. 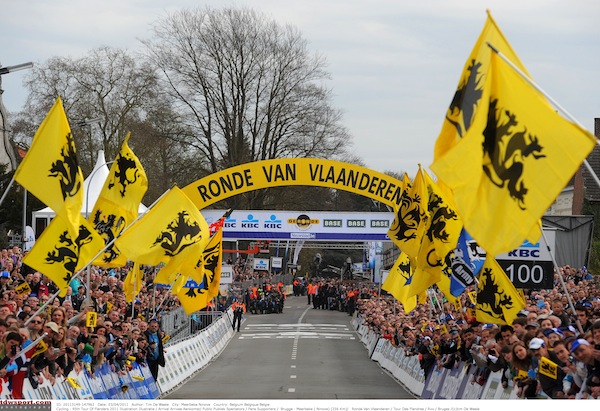 2 climbs are added to the route :  the Tiegemberg, after 87km, which will also become the first climb in this edition. The Berendries, the 8th climb, is back on the menu, after 2 years of absence and will be climbed between the Leberg and the Valkenberg.


The final includes the same 6 cobblestone climbs as last year.

The final starts with the Koppenberg, from there on, it is still 45km towards the finish. After the Koppenberg you have the Steenbeekdries (at 39km), Taaienberg (at 37 km), Kruisberg (at 28 km), Oude Kwaremont (at 17 km) and Paterberg (at 13 km). Suspense will be guaranteed, since each of these climbs could be decisive for the final result.


Duo Old Kwaremont – Paterberg: the heart of the Ronde.

The triple climb of the Old Kwaremont and the two passages over the Paterberg will remain the most spectacular part in ‘the Ronde’. In this way, the audience will be able to enjoy the maximum of the spectacle, without massive moves.

Add your story, info or media to Tour of Flanders 2015

Subpages for Tour of Flanders 2015