The Tour de France was for the first time organized in 1903 by "L'Auto-Vélo", one of the two leading French sports newspapers from that period. Henri Desgrange, editor of the concerning sports newspaper, wanted to lift the number of his readers till the level of its biggest competitor, "Le Vélo", and felt that organizing a cycling race throughout France, or a "Tour de France" was an excellent move.

On January 19, 1903, the first "Tour de France" was presented to the press. Initially the event was not really popular: Only 15 riders signed up. Only after reducing the entry fees, about 60 riders were found ready to appear at the start.

This was on July 1. The first tour consisted of six runs. The Frenchman Maurice Garin was the first Tour de France winner in history. Only 21 riders arrived at the finish.

In that period, the cycling rules were far from established and not really respected. In this context, the second edition of the Tour de France was a perfect illustration of everything that could go wrong. Riders took the train, supporters got aggressive or dragged racers from their bikes ... and since in that periode, the race also continued at night, numerous residents from the villages that were visited by the Tour protested against it. After having reached the finish line (the tour was stopped after 2 days!), the first 4 riders - including Maurice Garin - were disqualified and the 5th , Henri Cornet, was indicated as winner.

Despite all the initial adversity, Desgrange kept on organizing the Tour de France every year. From 1910, the Pyrenees are for the first time included in the tour program with the climbs of the Tourmalet, Aspin and the Aubisque. From 1911, the Telegraph and the Galibier are included. 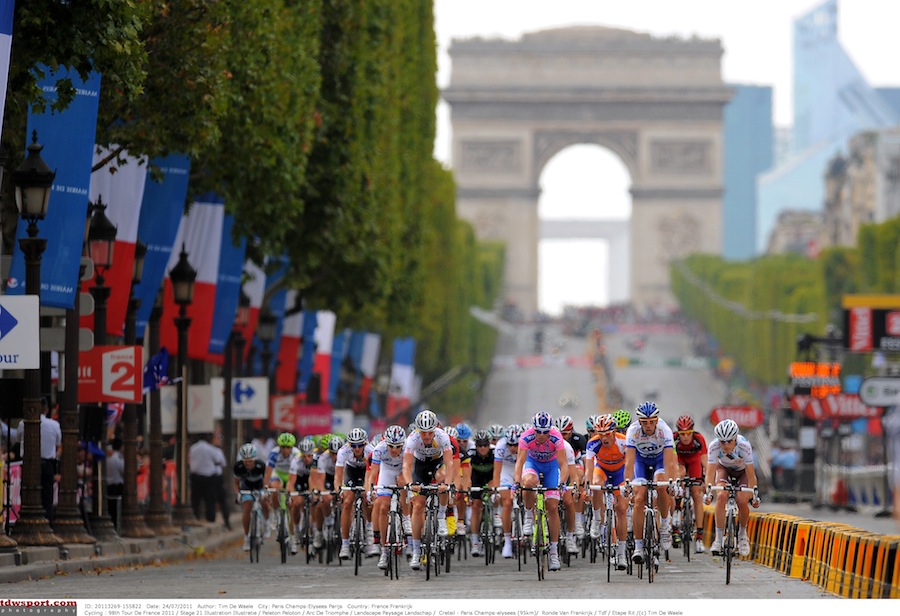 Since 1919, Desgrange introduces the yellow jersey. Why? Previously it was impossible for the audience to recognize the leader of the peloton. Why the yellow color? The organizing sports magazine was printed on yellow paper and the yellow jersey wanted to refer to it.

In 1939 the Col de l'Iseran, the highest passable mountain in Europe, gets included in the Tour Program.

During World War 2, the tour does not take place, and in 1940 Desgrange, the founder of the Tour, passes away.

In 1948, the final stage to Paris with arrival at the Champs Elysées is for the first time live on television.

In 1953 the points classification and the green jersey are introduced. The color refers to the first sponsor of the Tour de France, a manufacturer of lawn mowers.

In 1954, the Tour de France starts for the first time outside France, namely in Amsterdam.

Add your story, info or media to Tour de France