The Tirreno-Adriatico is a multi-day stage race, which starts at the Tyrrhenian Sea (west of Italy) and arrives at the height of the Adriatic Sea (east of Italy). 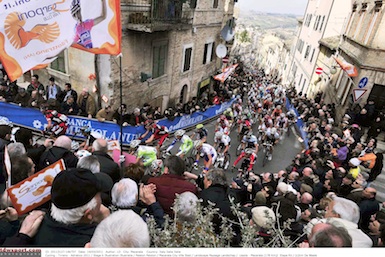 The race took for the first time place in 1966 and consists of 7 stages. The Tirreno-Adriatico takes place in the week before Milan-San Remo, and is often considered as a preparation for Paris-Nice and Milan-San Remo.

In 2008, the race disappeared from the UCI Pro Tour list because of a conflict between the organizer (RCS Sport) and the UCI, but since 2011, Tirreno-Adriatico is part of the UCI World Tour.

Add your story, info or media to Tirreno-Adriatico