Milan - San Remo, or Primavera (the "Spring" or the "first real one") is the first real cycling race of the season.

It was for the first time organized in 1907 and takes place on the Saturday nearest to March 19th. 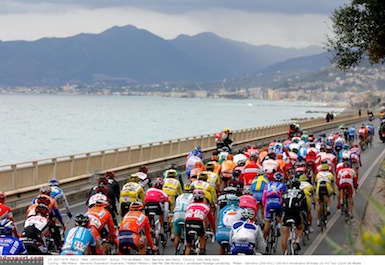 The absolute record with 7 victories, is held by Eddy Merckx (BE), followed by Costante Girardengo (It) with 6 victories.

Between 2005 and 2007, Milan - San Remo was part of the UCI Pro Tour, until the race was deleted from the list, due to a disagreement between the UCI and the organization. Since 2011, this classic is part of the UCI World Tour.

The 106th edition of Milan-Sanremo takes place on Saturday, March 19 and starts as usual in Milan.
The route is almost identic as the eidtion 2015 with the Passo del Turchino as first climb, at 140km of the finish.
The second climb is the Capo Mele, 100 km further on, immediately followed by the Capo Cervo and Capo Berta.
The real work starts with the Cipressa, at 21 km (top distance) from the finish.
The Cipressa is followed by the Poggio, which is also the last climb and last opportunity for the non-sprinters.
The finish lies after 293 km in the Via Roma, usually 3 km after the descent of the Poggio, which is in the advantage of the sprinters.

Add your story, info or media to Milan - San Remo