The Tour of Italy (Giro d'Italia, or Giro) is one of the 3 major cycling tours, together with the Tour de France and Vuelta a España.

The Giro is a stage race and lasts 23 days, including 2 rest days.

The first Tour of Italy (Giro d'Italia) was presented to the press in 1908 by the organizing newspaper, Gazzetta dello Sport, and started on May 13, 1909. The first edition was about 8 stages and the Italian Luigi Ganna, became the first winner of the Giro. It took until 1950 before a foreigner, and in particular the Swiss Hugo Koblet, could win the Giro for first time.

Since 1931, the leader of the general classification wears a pink jersey, the "Maglia rosa", because the organizing newspaper - Gazzetta dello Sport - is printed on pink paper.

While during the first decades the start and finish line were situated in Milan (also the headquarters of the Gazzetta dello Sport), their locations varie since then. Occasionally, The Giro also passes abroad. 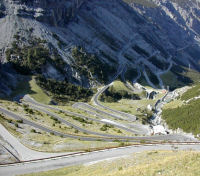 The Giro is known for its tough climbs. Some of the best known are the Stelvio , the Pordoi pass and Gavia pass .

In the history of the Giro only 3 riders managed to win it 5 times each: Alfredo Binda, Fausto Coppi and Eddy Merckx.

The Giro has known popular and less popular moments. In recent years, its popularity was increasing steadily. However, because of a dispute with the UCI, the Giro was deleted from the ProTour list in 2008, but since 2011, it is part of the UCI World Tour.

Add your story, info or media to Giro d'Italia