The race E3 Harelbeke was for the first time organized in 1958, during the construction of the E3 highway between Harelbeke and Antwerp (BE). Therefore, during the first years, the race was driven from Harelbeke to Antwerp and back.

Until 2010 it was called the E3-Price Harelbeke, but since 2011 the word “Price” was skipped from its name.

Upto 2011 the race took place on the Sathurday of the week preceding the Tour of Flanders. Since 2011 however,  it's part of the UCI World Tour. Therefore, since 2012, it takes place on the Friday before Ghent-Wevelgem. 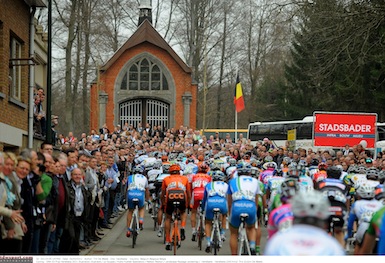 Edition 2016 :
The 59st edition of the E3 Harelbeke, which takes place on Friday, 25/3/2016, and counts 206,4 km (9km shorter than the previous edition) includes 15 climbs (in stead of 17) and has a more intensive final. This final will start at the Kapelberg, immediately followed by the Paterberg, Oude Kwaremont, Karnemelkbeekstraat andTiegemberg. The arrival lies 20km further on, at the Stasegemsesteenweg.

Add your story, info or media to E3 Harelbeke